LVP Publications is proud to present: REVISITING THE UNDEAD 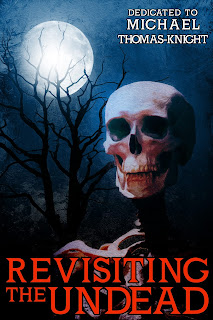 A good story never dies. But, sometimes, you have to dig deep to find the treasures among the rotting corpses. The ones with enough meat on their bones to sink your teeth into. The stories that still have enough magic in them to get up and dance.

We’re Revisiting the Undead to resurrect those tales and bring them back so you can sit with them for a while, and remember them from their heyday, when they shone like the brightest sun. They still shine, but in moonlight now: softer, colder.

The undead have returned. Invite them in.

Featuring:
X-Ray Specs by Michael Thomas-Knight
Missing by Poppy Z Brite
Doing Time by Rob Butler
Heartbeat by Nancy Kilpatrick
Chingu by Todd Sullivan
Beautiful Things by Anton Cancre
The Neighborhood Has a Barbecue by Max Booth III
Puppies For Sale by Kurt Newton
The Assassin by Patrick Breheny
Slowly I Turned by Kenneth Goldman
Active Member by Ray Garton
Decor by Michael Cornelius
Party Time by Mort Castle
A Deepening Heart by Thom Brucie
Human Resources by Greg Chapman
They Restarted the Mill at Killington by Bob Moore
Lorscapedia by Edward Ahern
Bridge Over the Cunene by Gustavo Bondoni
Knott's Letter by Jason A Wyckoff
Lifecast by Craig Spector


Available now at the following retailers:
Barnes and Noble
Amazon

Also check out our previous and upcoming releases on our Anthologies page!