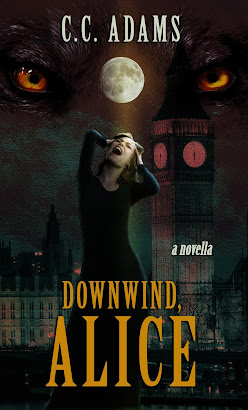 DOWNWIND, ALICE by C.C. Adams
Meet Alice Morecambe.
After two years away, a chance encounter with her ex-boyfriend Kieran proves awkward and sours when Alice lashes out at him, before storming off. An unfortunate turn of events that would soon blow over, right?
Wrong.
Because, unfortunately for Alice, Kieran is ...different now.
For the last couple of years, Kieran has kept a tight rein on more than his feelings - but now he's going to do more than tell Alice how he really feels.
He's going to show her.
And Alice won't know what's downwind until it's too late.
Available from LVP Publications in paperback, ebook and audiobook October 2020. Pre-order available now!
Cover design by Greg Chapman, Audiobook narration by Desmond Manny.
Posted by LVP Publications at 8:00 AM No comments: 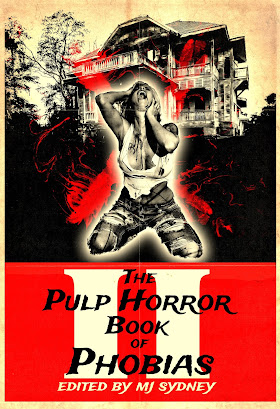 Expanding upon the Pulp Horror Book of Phobias, this second volume brings thirteen not-so-irrational fears much closer to home.

What happens when a family goes missing in their own home... an acquired piece of artwork turns out to be much more than bargained for... a child is left home along with his grandma.... the kitchen compost gets out of control... or all the doors in your house refuse to open?

Pre-orders available now direct from LVP Publications. Pre-orders for the paperback and hardcover include a free copy of the audiobook upon publication.

Posted by LVP Publications at 8:00 PM No comments:

Johnny Headcase—big, tough as nails and surprisingly quick, especially with a gun and a roll of quarters. When he finds out vampires have invaded his town, he doesn’t hesitate to fight back. Pretty soon, though, he realizes just how many there are, and calls in reinforcements.

Katya—a healer and an inventor with a big heart. While quick and effective despite the wound or condition, her methods require her to harness and unleash the power of sex.

Lydia—a striking young (not quite human) woman who wears her favorite colors of pink and black shamelessly. She's fast and strong with a heart full of fiery determination and she's out for redemption, one bounty at a time.

Gavin—a wise ass werewolf who ditched his last name with the rest of his history. He lives to fight, loves to joke around and is fiercely loyal to his friends.

The four band together and join forces to take down King City's Master Vampire and his horde of vampires, demons, trolls and other monsters unleashed on the city in an effort to rebuild King City in his own twisted image.

Audiobook (December 2020)
Pre-order the complete serial plus audiobook for a limited time direct from LVP Publications.
"A lighthearted, bonkers romp filled with over-the-top violence and casual sex, Headcase is what you'd get if the Underworld movies had a baby with Deadpool." — Patrick Freivald, Bram Stoker Award nominated author of JADE SKY and MURMUR.
“Like the A-Team on steroids, Johnny Headcase and his misfit team of bounty hunters are on the case to bring down a gang of vampires in seedy King City. Funny and fast, and with a great retro vibe, MacGregor and Lipp’s HEADCASE is a riotous and irreverent supernatural crime noir for grown-ups. A ripper of a tale.” — Lee Murray, award-winning author of Into the Mist.
Posted by LVP Publications at 12:52 PM No comments: