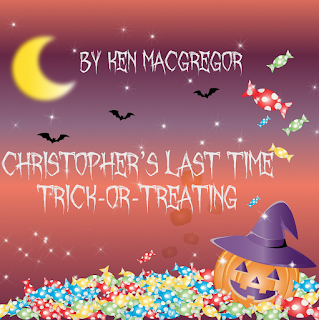 Christopher was supposed to be Godzilla, but his dad didn’t finish the costume on time. It was the latest in a long line of disappointments from Dad.

With a little help from Mom, Christopher made his own Samurai costume. Using cardboard, tinfoil and copious amounts of Scotch tape, he decorated his bike helmet. The armor was made of similar stuff and he already had a fake katana. That’s how Christopher got the idea.

Looking into the mirror before he went trick-or-treating, Christopher gave his reflection his best warrior face. Then he grinned.

Two hours of walking in cold rain turned Christopher’s Samurai into a garbage robot with a sword. Dragging his candy bag through puddles, Christopher approached the last house on the block. The light above was on, but the glass globe around it was so dirty it barely lit the porch. A cardboard cartoon skeleton hung in the open space behind the screen door. A wide, adult figure shuffled into view.

“What are you supposed to be?”

Looking up at the enormous person, Christopher tried but was unable to figure out if it was a man or a woman. The grown-up popped a bubble and the smell of cherry gum filled the air.

“Samurai, but my costume got wet, and now I look like a stupid garbage robot.”

The huge belly shook with laughter and he (or she) opened the door. Held loosely in one hand, a plastic pumpkin rattled with bite-sized candies.

Christopher blinked up the other person.

“It’s just an expression,” Christopher said. “Everybody knows that. Can I please just have some candy?”

The grown-up shook its head. The jowls sounded like Jell-O dropping on the floor.

The orange, plastic pumpkin hit the floorboard, spilling Skittles packets at Christopher’s feet. The huge person grabbed fistfuls of belly with both hands. Tendons stood out on its neck as fingers pushed through fabric and flesh. With gritted teeth, it ripped itself open. Blood poured out, covering the Skittles and splashing up on Christopher’s shoes.

Backing away, Christopher almost fell down the steps, but caught himself in time. He opened his mouth to scream, but only choking noises came out. He ran, bag of treats forgotten, clutching his plastic katana like he was heading into battle.

Behind him, the huge, genderless hulk chuckled.

“I love that trick,” it said as it stuffed its guts back where they belonged. Picking up a packet of Skittles, it tore off one corner and dumped the candy in its mouth.

Ken MacGregor writes and edits stuff. When not doing that, he can frequently be found reading, playing with his kids, or laughing at life's bizarre little quirks.

Posted by LVP Publications at 1:45 PM